The grape harvest in Bordeaux has been in full swing since mid-August. Like everywhere else in France, the winegrowers started the picking process particularly early this year due to the drought in the summer months. “The growing season ticked along with the normal challenges of frost, hail and sun scorch. However, this year’s greatest challenge was the significant rainfall in spring, which was double that of last year, and which, in turn, brought on the challenges of mildew and disease which is no small matter when growing organic grapes,” says Dawn Jones-Cooper of Château de Monfaucon in Grezillac, Entre-Deux-Mers. 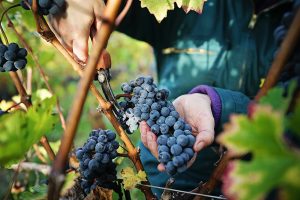 September was particularly warm, with temperatures reaching the low 30s, which Sally Evans of Château George 7 in Fronsac recognises brought a challenge of its own: “The vines were stressing. Some places were having to harvest then because the stress was a bit too much.  Fortunately, we weren’t affected too badly because our vines are 35 years old and have deep roots to hold on to.”

With early harvest necessary across all of Bordeaux, the first grapes for the Crémants arrived in the presses in mid-August, followed by the white grapes for the dry white wines – about two weeks earlier than usual. At Château de Monfaucon, which only grows white varietals for Crémants and dry whites, grape picking was complete by the end of September, and fermentation was well underway.

This year, many of the red grapes were harvested in the first half of September rather than in the second. Although this wasn’t the case for Sally Evans whose 100% Merlot plot in Fronsac was only harvested at the end of the month. “We always harvest late; we are at 60m-70m above sea level so benefit from the breeze and can delay a little.” 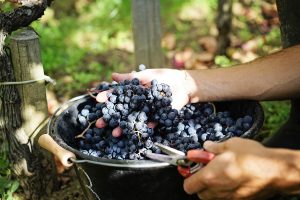 The Covid-19 outbreak, which has of course affected winemakers throughout the year, has continued to have an impact during the harvest period.  With social distancing measures still in full force, many winemakers have worked with smaller picking teams and limited the number of people in the winery. Sally Evans recognises: “In the vines, it’s easy as the pickers are spread out but they tend to congregate when on breaks or when they are bringing in boxes so we need to ensure that they keep their distance.”

At this stage, both Sally and Dawn are optimistic that whilst the quality of the 2020 vintage will be high, the quantities will be lower than in recent years. We can’t wait to see if their prediction is true for the whole of Bordeaux.

If you’d like to learn more about harvest, the Bordeaux Wine School have launched a series of autumn webinars: How the Experts Tackle Bordeaux.

Launched on Tuesday 22nd September with the first-ever live broadcast from the vineyards, winemaker Basile Tesseron, a rising star in Bordeaux, took participants on a behind-the-scenes tour of his property Château Lafont-Roche in Saint Estèphe, as it embarked on the harvest. The broadcast included a peak at the grape picking process in the vineyard as well as an insider’s look at cellar operations.

Additional webinars this autumn will include a panel discussion, chaired by Mary Gorman-McAdams, MW and accredited tutor for The Bordeaux Wine School, with Bordeaux’s next generation winemakers and an in-depth look at the region’s most planted grape variety, Merlot will host the upcoming sessions.

Registration for the autumn webinars is now open and previous webinars can be viewed through playback. Sessions include:

Meet the Next Generation of Bordeaux: Discover how the new faces of Bordeaux are tackling climate change, applying new techniques in the vineyard and cellar cellars, and safeguarding their iconic terroir for future generations.

How Sweet Bordeaux is Breaking Out of the Box –  Bordeaux’s signature golden wines have a long history thanks to a unique microclimate, diverse soils, and meticulous craftsmanship. This webinar will share perspectives from winegrowers and professionals making their mark with these exciting, yet often overlooked wines. We’ll explore the rich range and versatility of botrytis wines – can we truly get them off the dessert list? Watch the webinar here.

27th October @ 6pm: Hallmark of Bordeaux: 100% Terroir – Getting to grips with the idea of terroir is fundamental to understanding this large region and its wines. In the webinar, Jane Anson will explore the questions: “what is terroir?” and “what is its impact on wine styles?” We’ll dive deep into Bordeaux’s location at the confluence of two major rivers, its dozens of local climates and soils, and the human factors that are shaping the wines across Bordeaux today. Register here.

Business on a Budget in Bordeaux

Get on Board with Bordeaux in 2022