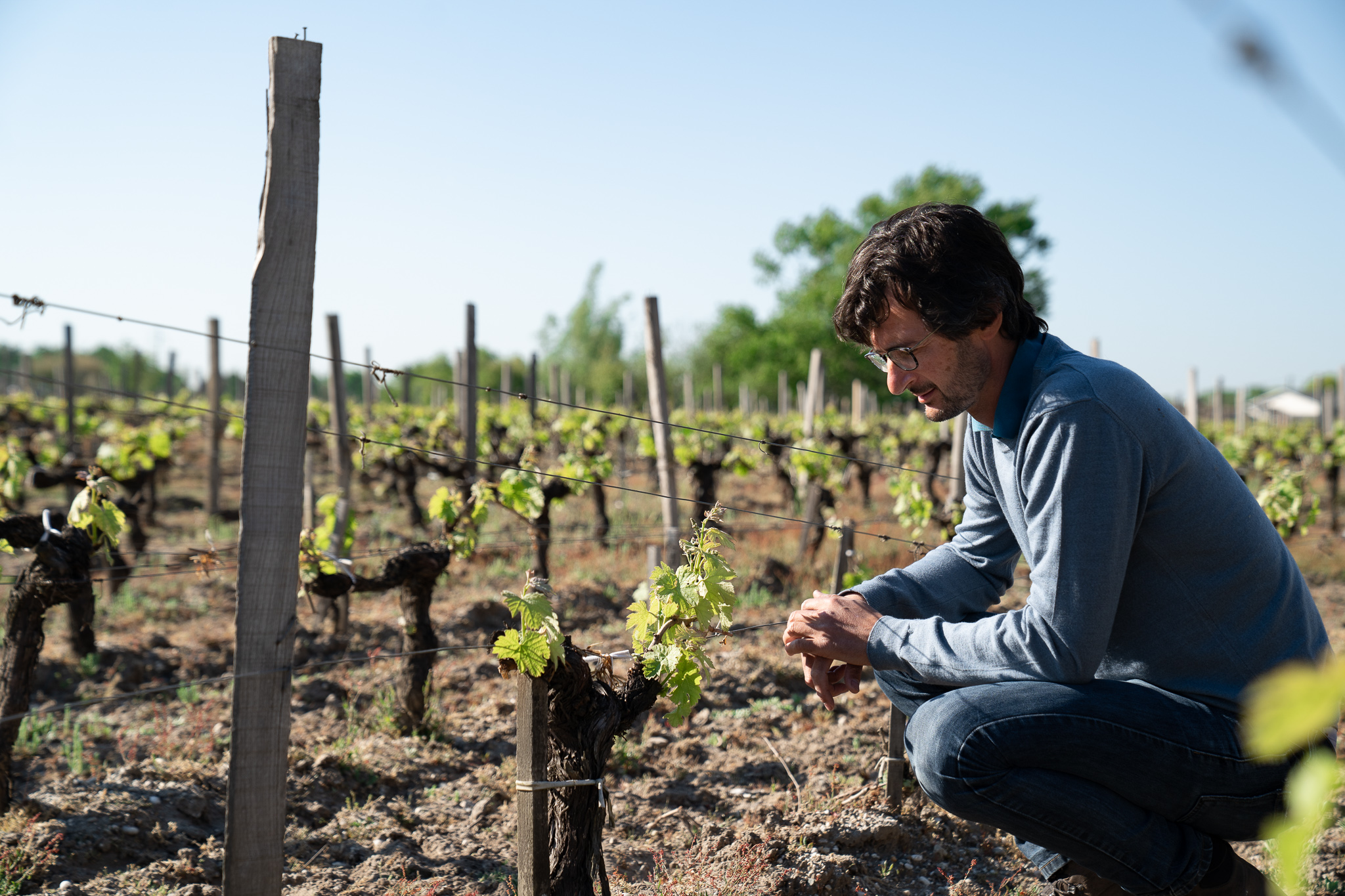 “We are no longer just farmers, we are also managers and preservers of a landscape and its diversity” 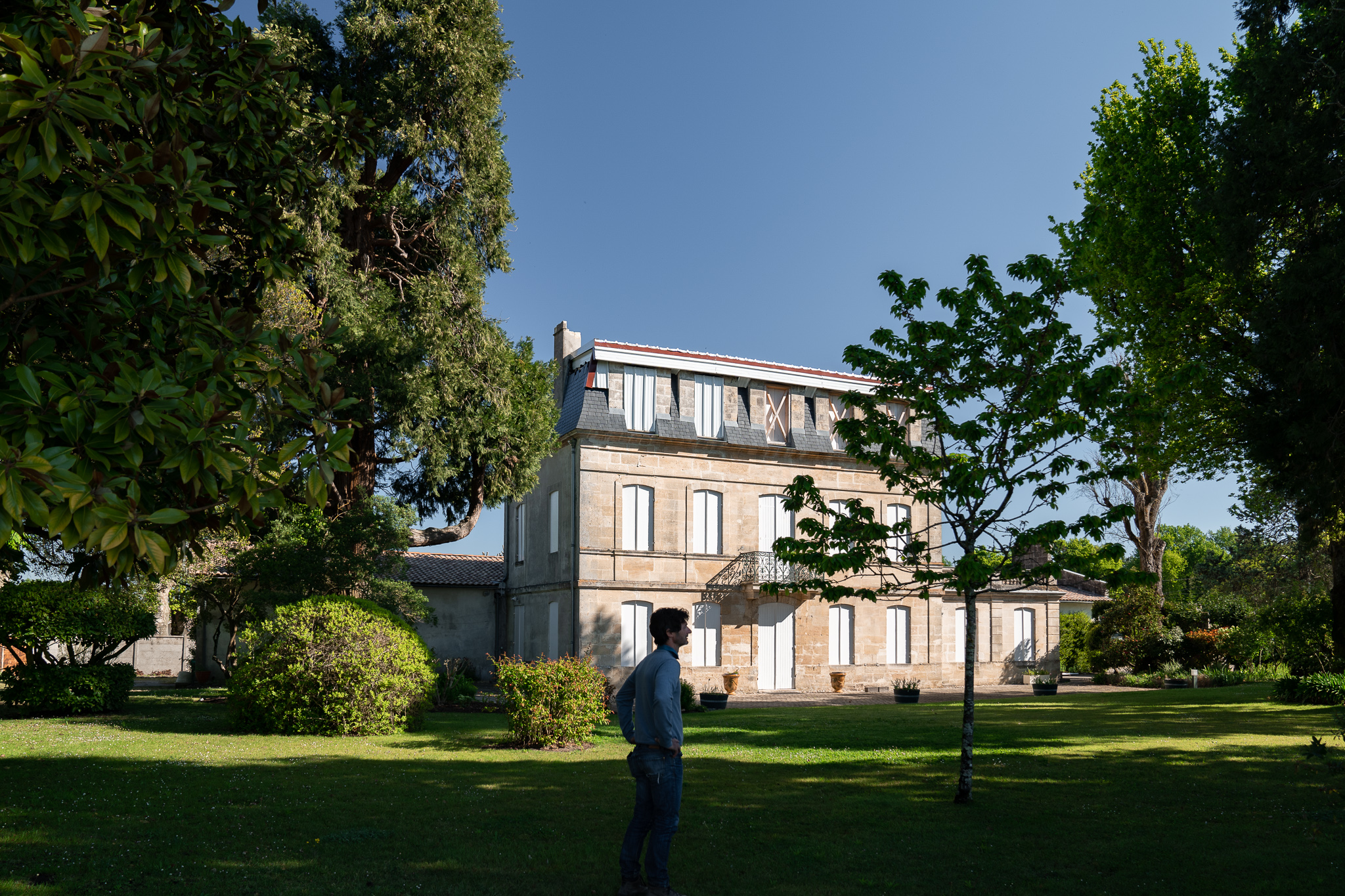 Well-known in the 19th century, Château Paloumey was nevertheless abandoned in the 20th century before being taken over by Martine Cazeneuve in 1989, already with a sustainable agriculture approach back then. At the time there were no vines or cellar, the vineyard has been fallow for 40 years.

“My mother has always had a sensitivity to the environment” 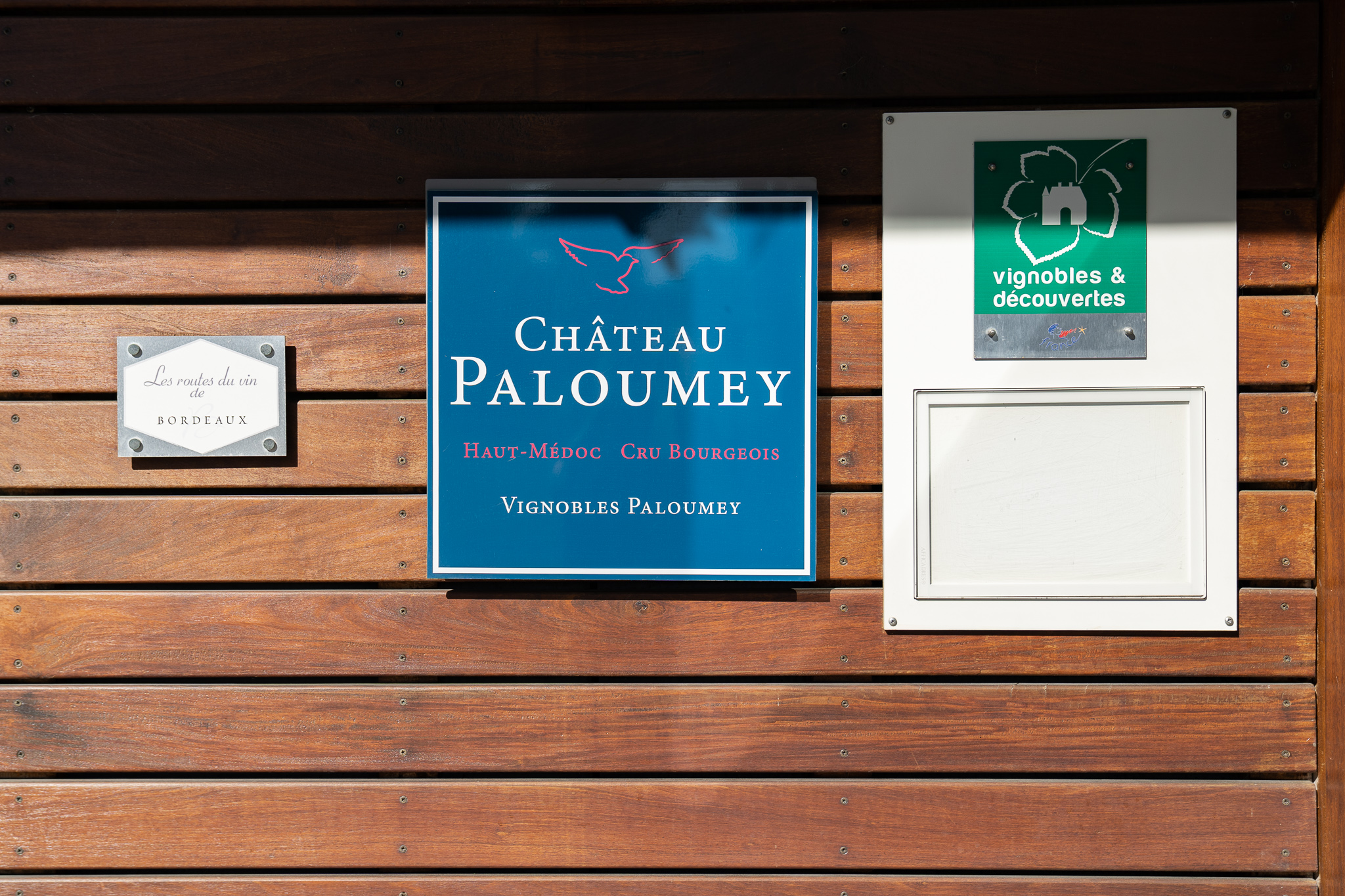 Pierre Cazeneuve took over the 42-hectare vineyard in 2015 and immediately started a gradual conversion to organic farming, which will reach 100% from the 2021 vintage. This is all the more relevant since the neighbouring plots are also organic.
“I held on to my values ​​and expectations, and I had the confidence that I could do it” 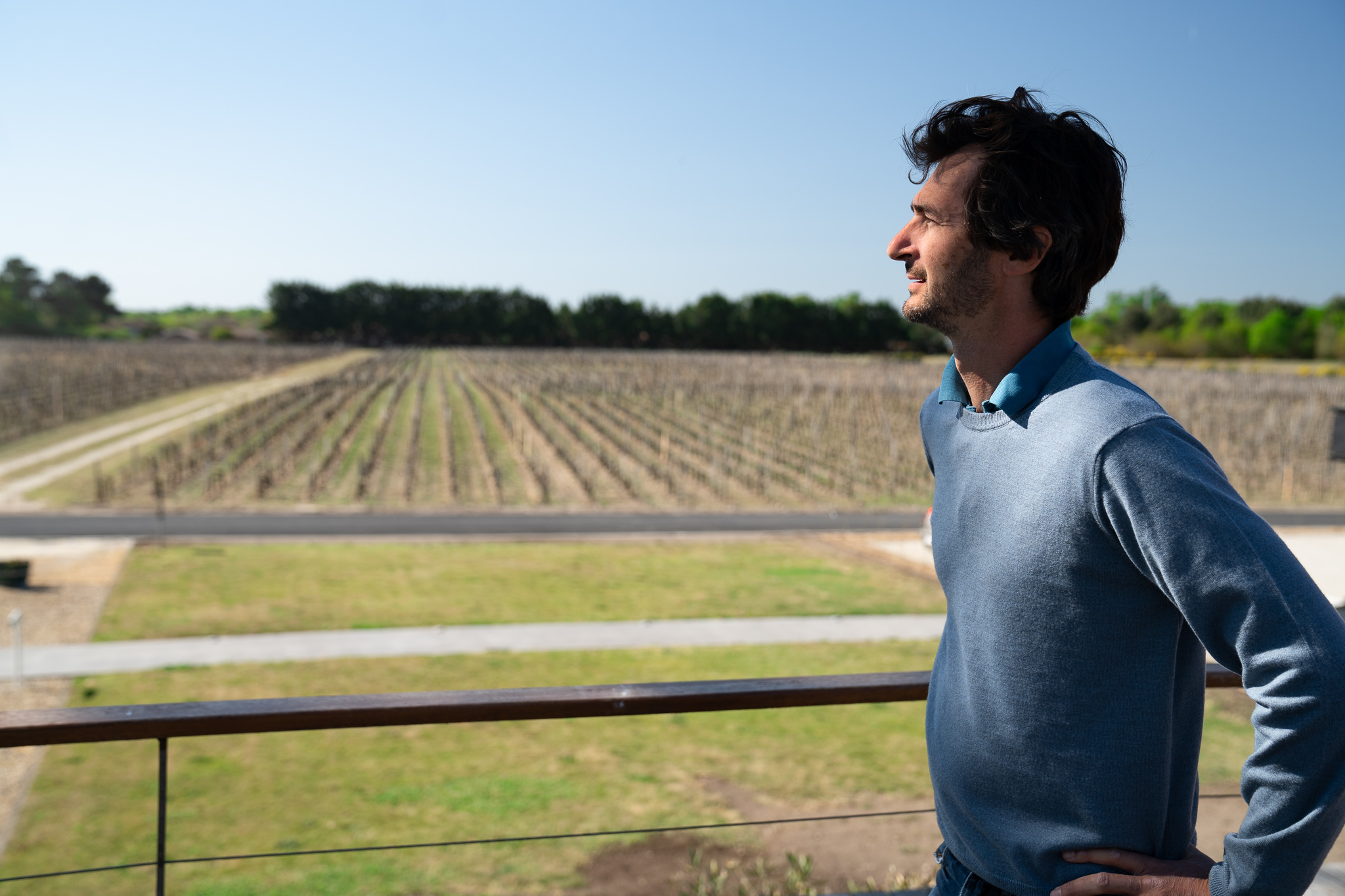 An agronomist by training, he already knew the job rather well, given that he has seen and participated in the winemaking work since his childhood.
Pierre Cazeneuve is particularly in favour of turning the soil around the vines to limit, among other things, the spread of quack grass, a perennial weed. 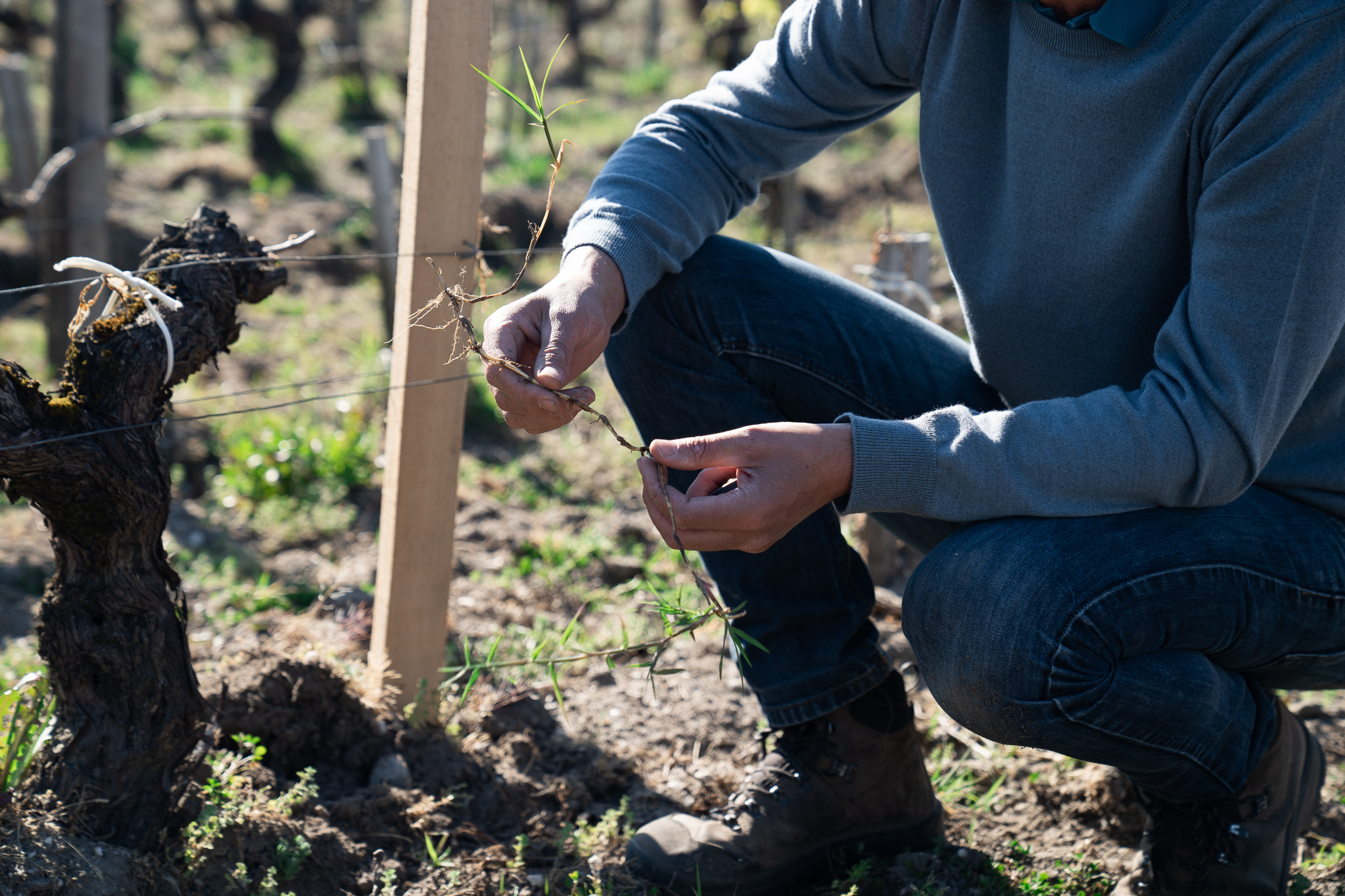 Paloumey’s environmental approach extends well beyond its organic farming certification.
Agro-forestry: “I give back 2 rows of vines to the environment” 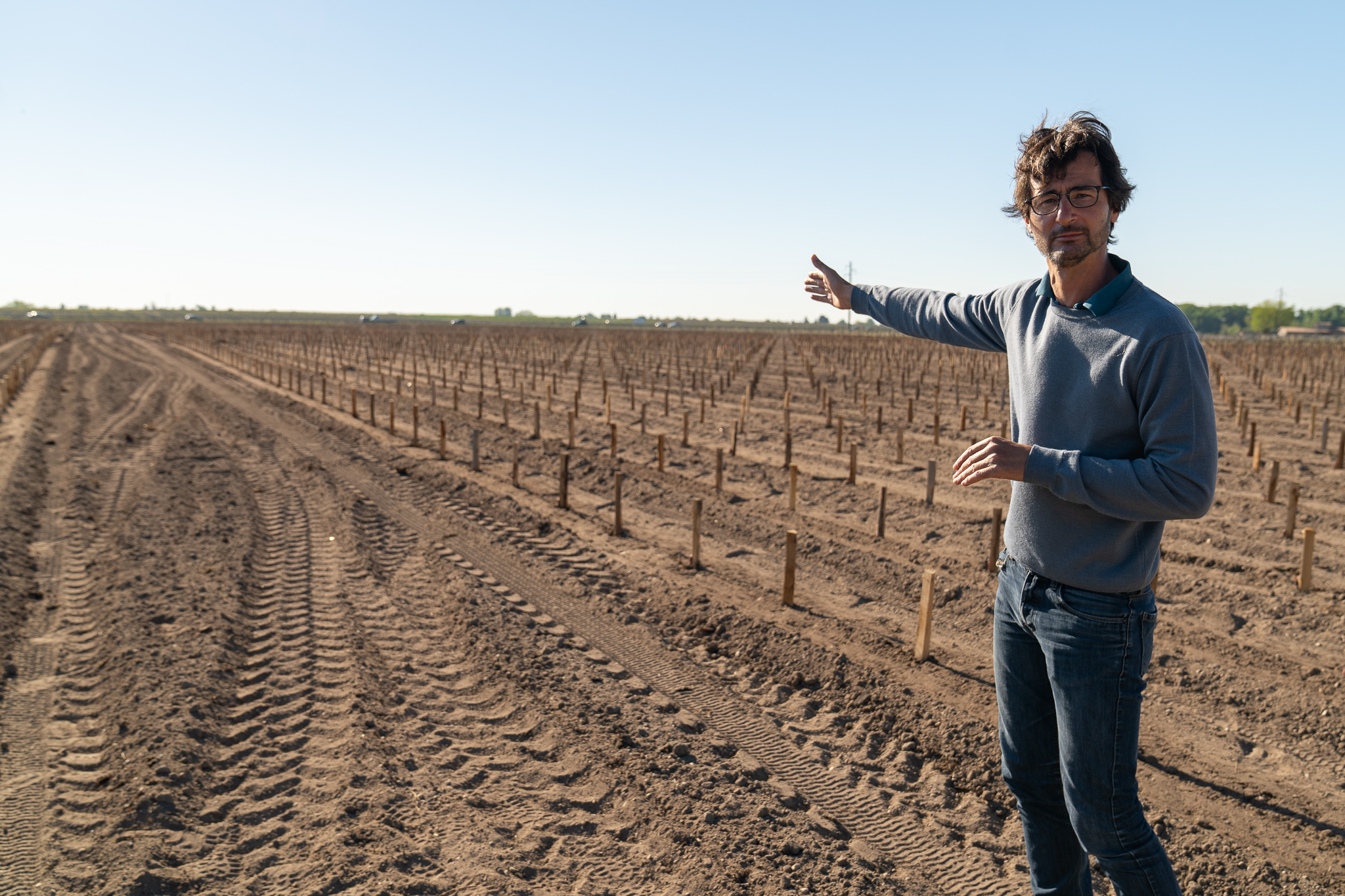 Pierre Cazeneuve has just planted a plot of 4 hectares in agroforestry. For every 5 rows of vines, he leaves 2 rows free to plant a line of trees to test this method.
The idea is to create a bioclimatic buffer: the trees bring out water, create shade and wind effects that reduce the impact of the temperature, which will be increasingly high in summer. 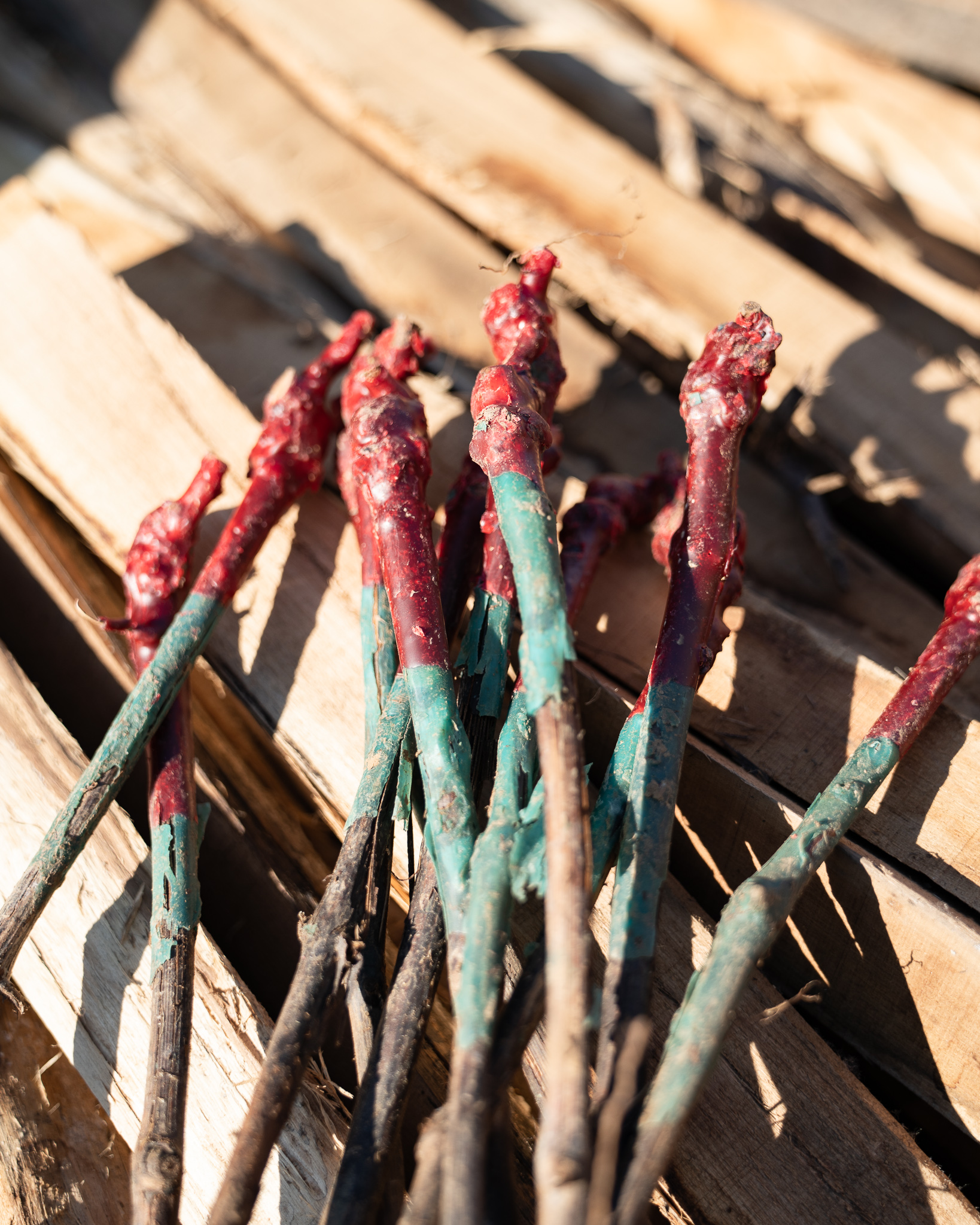 The interest is obviously also in the richness of the soil: “The biodiversity of the roots allows us to make the fungi work” including the mycorrhiza which lives on the roots.
The trees will be spaced out enough from the vines and pruned in such a way as not to capture the energy necessary for the proper development of the vines.
“It’s a test” – Pierre Cazeneuve will measure the effects on the first rows to refine this practice which has been thought of in a reversible, practical way and whose purpose remains to produce wine.
“Producing the best wines, in line with the terroir and in a territory in harmony”

Produce and use only solar energy 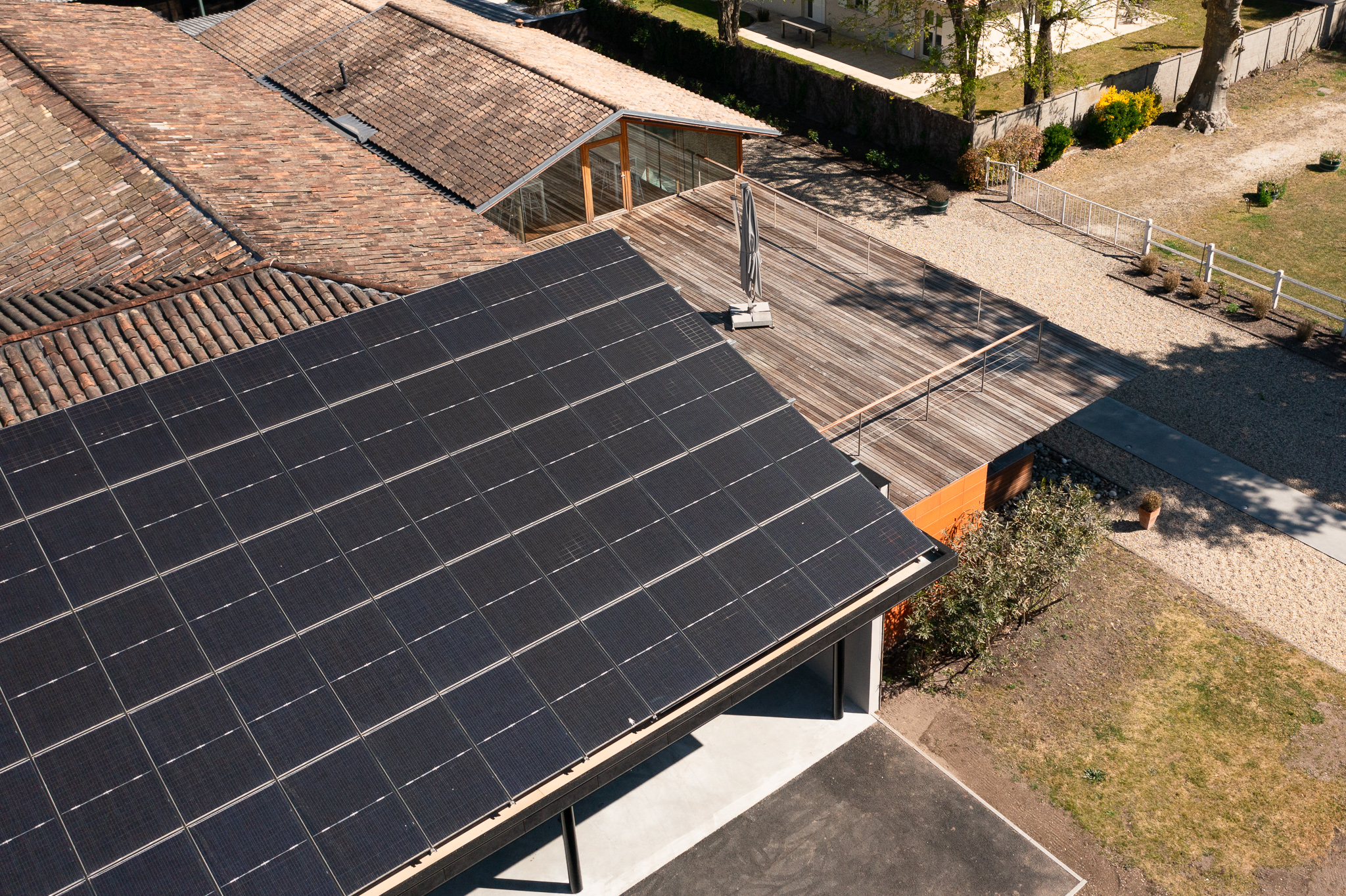 The property has had a facelift in recent months with modern infrastructure and the installation of 400 m2 of solar panels that allow the operations to be self-sufficient in energy, even if it means reselling it if production exceeds consumption. The roof of the shed is facing south, so “we might as well exploit this exposure and the energy of the sun at our disposal”.
There are already plantations of vimen (wicker) which will make the surroundings of the technical rooms greener. Pierre Cazeneuve intends to cover the entire property. We can already hear songs of the birds twirling in the flowered and tree-lined garden of the house in which Pierre Cazeneuve has planned to create several vegetable gardens. 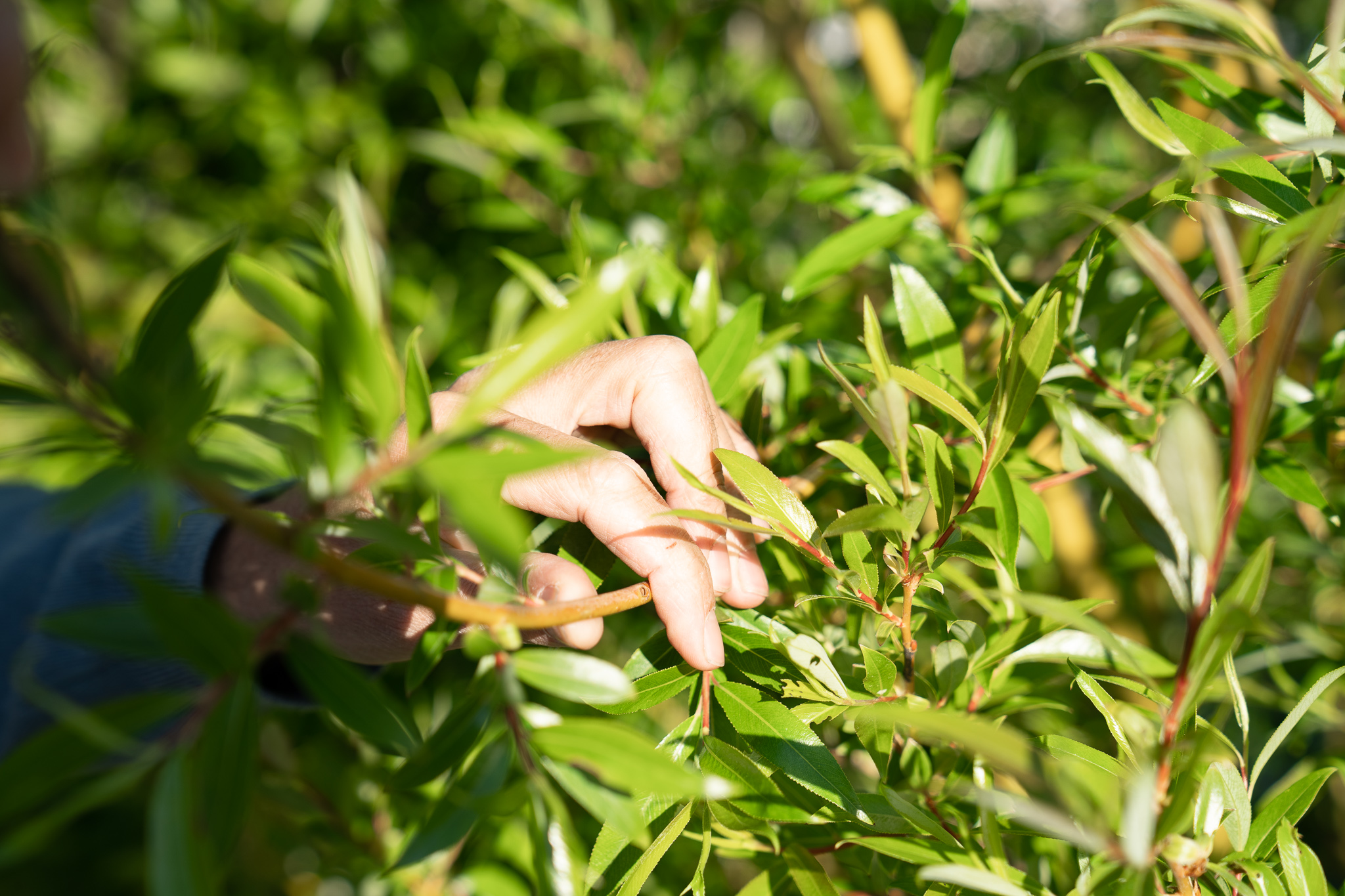 The next step is the installation of charging stations for electric vehicles available to visitors for wine tourism and also to the owners of electric vehicles who live in the surrounding area. Pierre Cazeneuve intends to make visitors as aware of his environmental initiatives as presenting his wines to them. With this setting, it would be nice to sit in the sun on his beautiful terrace for a tasting anyway! 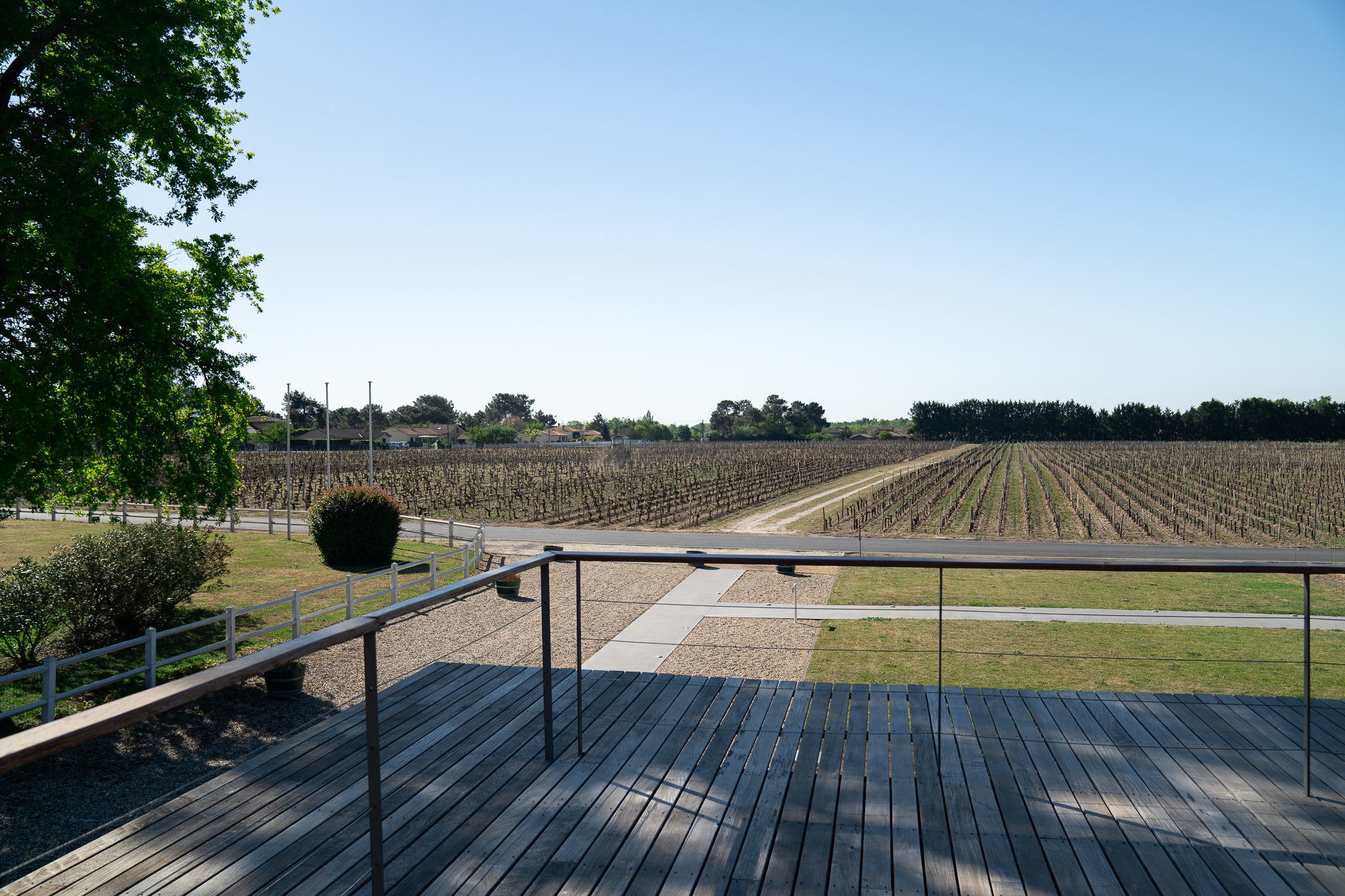 “Meeting the new expectations of society”
Raising awareness of this 21st-century viticulture also involves welcoming and training in the ownership of winegrowers in association with apprentices from Auteuil. 15 apprentices are trained in the profession of winegrower, which Pierre Cazeneuve is trying hard to recruit.
“It’s a two-way exchange between experienced winegrowers and apprentices who are aware of new environmental practices”.
In the logic of transmission of Château Paloumey and in partnership with the town hall of Ludon-Médoc, the estate welcomes two classes from the village school each year to educate the next generation about the viticulture of tomorrow. The town hall has made a plot available to the Château that Pierre Cazeneuve operates and on which he can accommodate students to introduce them to viticulture and encourage vocations. 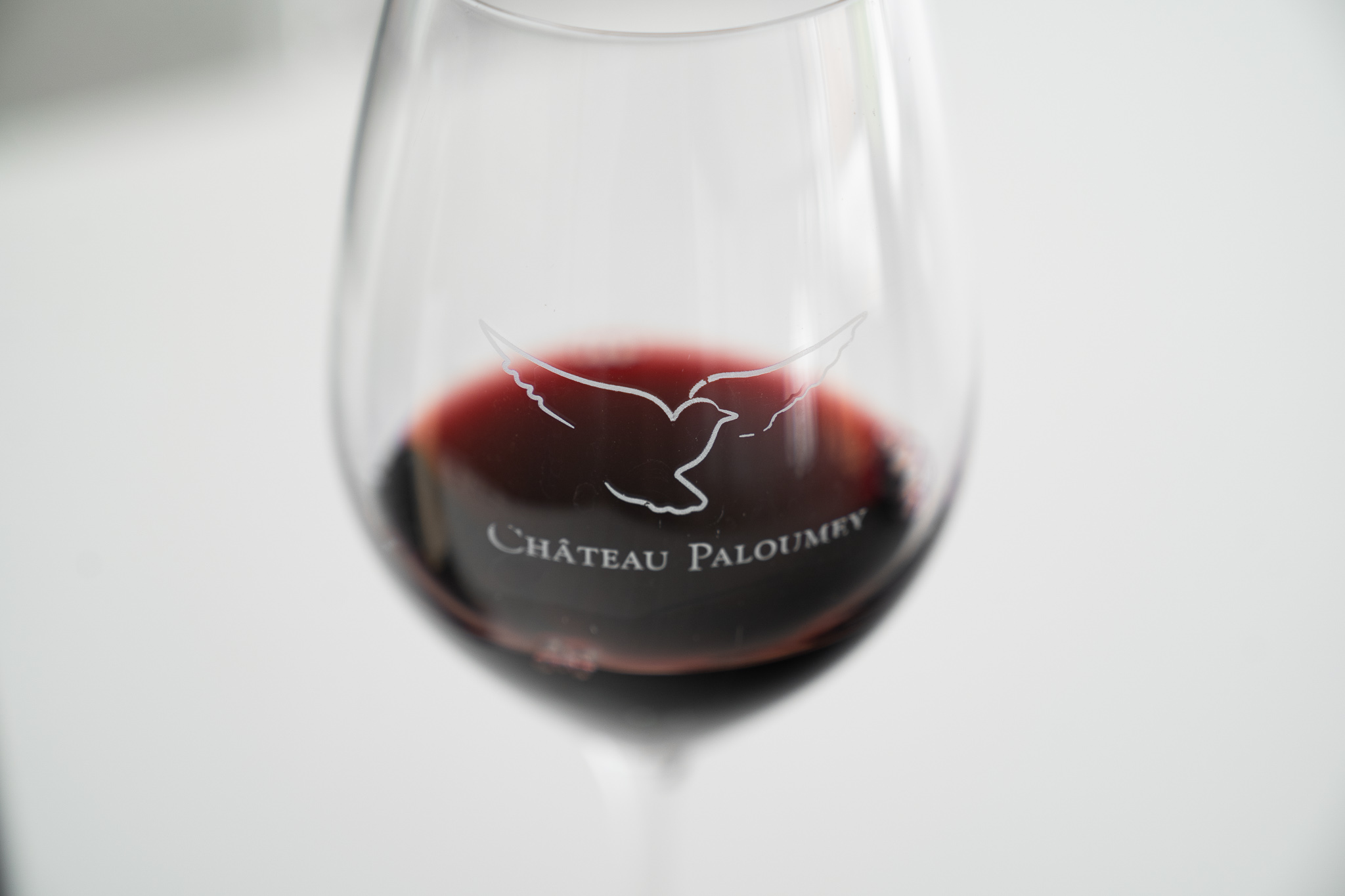 Pierre Cazeneuve has many more ideas he wants to implement.
“Paloumey” originates from the Gascon dialect and means “the place where wood pigeons pass”. Each year, this migratory bird flies over the Bordeaux region before reaching the warm lands of the South.

Discover Château Paloumey and their wines

Bordeaux wines to enjoy this summer
<