Words on Wine With Aliye Melton

Aliye Melton is testament to how Bordeaux is moving with the times. Aliye moved to France to study at the INSEEC Business School in Bordeaux, where she embarked on an MBA focussing on wine. Having now lived in region’s capital for the past 18 months she sees first hand how Bordeaux-based châteaux are embracing digital media. 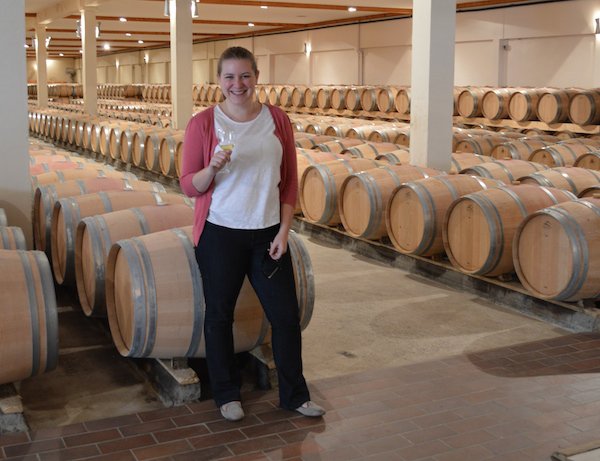 Aliye began her working life in start-ups back in Silicon Valley. In between positions, she started helping out at a family friend’s winery in Santa Cruz, California, but this wasn’t her first introduction to the world of wine, as she explains: “I had a lot of exposure to the wine industry as a kid. My grandfather and great-grandfather were both working with wine and I’ve always been interested in it.” When she was appointed into a full-time position at another start-up, she continued to help out at the weekend. Three years later, when the start-up she was working for was sold and the company culture changed for the worse, she decided it was time to embark on the MBA she’d always planned to do. But rather than do a regular MBA, she decided she’d do something more in tune with her interests. “I began looking into MBA programmes and doing a bit of research. I thought why not do something with what I really love? Which was the wine industry. So I started putting some feelers out and stumbled across the INSEEC programme in Bordeaux. I didn’t have any formal training in the industry, but I got in and here I am!”

It’s a two year MBA course, with a focus on wine marketing and management, which covers everything from learning about the Bordeaux classification system and how to use social media in the wine industry, to understanding the intricacies of import and export. Making the link with her previous work experience, Aliye chose to focus on content and digital marketing. She started her blog, Cuvee Appeal, as a way to update friends and family back home of her everyday life, but it has since become a tool for her to discuss all things Bordeaux and flex her wine knowledge. Last month it won her the title of best blog writing about Bordeaux wines, by the Winerist that’s not only given her a great head start in the industry and the area she wants to work in, but also the opportunity to meet likeminded people. “I started it as a way for my family to keep up with what I’m doing. But it’s become so much more – a part of the future of the wine industry. There are a lot of people being inventive here and they’re not afraid to give it a go, so I thought I’d try too!”

So how does she find life as an expat and student in Bordeaux? “Coming to Bordeaux was a big change for me, but it’s a great city and I like the small-town feel; I run into friends or people from the wine industry all the time, who tell me that there’s a great tasting happening somewhere. I love that aspect. There’s definitely a different style and perspective here. There are a lot of people doing great things in Bordeaux and there are a lot of great marketing efforts, for example by the smaller producers. I think there’s a great deal of potential here. There’s many fun things going on and people are being experimental and trying to figure out what works for them.” Sounds like the perfect place for her to get her next step in the wine industry! And what about the wine? “When I first got here I was stumbling around blind, trying to figure out my way around the appellations. I grew up with a very different system, so I’m still learning things, and that’s what I love about Bordeaux – you can go from one area to the next and discover a completely different wine. In terms of preferences, I lean towards Cabernet dominant blends, such as the wines in the Médoc and I’ve also spent more time out there. I’m also a huge fan of the powerful & intense red wines from Saint-Estèphe and I’ve been exposed to some really great round and structured wines from both big and small producers in Pomerol – that’s another area that I really like.”

She loves Bordeaux, but she has a preference for London: “London is probably my favourite city on the planet – any chance I have to go, I do. And I always do at least one thing wine-related.”  And how does she find being a woman in the wine industry? We’re thinking of particular women, such as Jane Parkinson who won the UK Wine Communicator of the Year Award in 2014  “There’s a lot of potential for women in the wine industry – the chief management positions are still very male dominated, but I’ve met a lot of women who either work in wine or who I went to school with, who are paving the way for women like me. The battle’s not completely won, but there are great women out there.” Any heroines? “My heroine at the moment is Madeline Puckette of Wine Folly. She does the most amazing work and has really great things to say. She’s my inspiration as I’m trying to reinvent myself in the wine industry. She does a great job of demystifying wine and making it accessible to the public.”

And finally, any favourite wine pairings? “I’m a huge foie-gras fan – I know the traditional pairing is with a glass of Sauternes, but I also really like it with glass of red Bordeaux. It’s very rich and when paired with a Bordeaux wine that can be very tannic, such as a Saint-Estèphe or Saint Julien (they are my go-tos!), it will stand up to the wine. I also love grilled meat, such as a Mediterranean grill. Normally it’s marinated meat with fresh, grilled vegetables and a lot of garlic, herbs, onion and tomato. Sometimes there’s a bit of citrus, but it’s usually simple flavours blended together for a healthy, refreshing and delicious dinner. Bordeaux really pairs well with that too. I would probably pair it with something from the Right Bank, like Fronsac, which marries well with pork and other red meats. It’s a softer and fruiter red wine, leaving a bit more room to play with spices. The wine shines through and shows itself, revealing its full potential. One of the things I really love about Bordeaux is the diversity of its wines; you can do so much with it and there are so many different options!”

Words on Wine with Julia Oudill
<


Words on Wine with Mumtaz Lalani
>