Words on Wine with Oz Clarke

We spoke to him last week to find out more about the journey that lead him there. 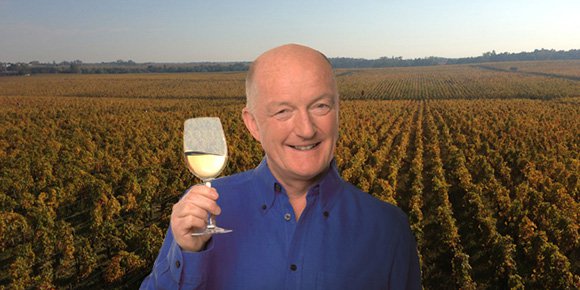 Clarke embarked on a degree at Oxford University to study Theology and Psychology, and whilst wine wasn’t really on his radar, he decided to join the university wine tasting course for ulterior motives, as he explains: “To be honest, girls were the most important thing at the time and I was desperate for a girlfriend. The wine society was just £2 a term with four tastings and you could take a guest, so all I was just thinking was: that’s four dates! I thought I would become sophisticated and irresistible to women.”

While none of the girls gave him a second date, his first tasting would form the foundation for his career in wine, as well as ignite his lifelong love affair with Bordeaux. “I can still to this day remember that they brought out this old bottle to give us a treat. It was 1962 Léoville Barton and it was just a revelation: the way a wine could be so dry, so austere, so rich with fruit and at the same time swimming with perfume. The sugar had been sucked out of it, as though by dragons, and yet it was still rich and dry and succulent, and it was filled with the smoke of cigars and Cedar wood. I thought it was just the most astonishing thing. I was lucky that that was my first ever tasting and from that very minute, Bordeaux started getting its claws into my heart.”

Besides an incident when he was three, which involved drinking some of his mother’s damson wine at a picnic – she and his father were busy rescuing his older brother from drowning in a river (who luckily survived!) – university was the first time wine had been put in front of him and the question posed: ‘what do you think about these?’ Fortuitously for us, his first wine experiences began with Bordeaux and continued to throughout university: “I had this one wonderful tutor, who if we’d had a good tutorial, he’d bring out a bottle of Beychevelle ’61. If we hadn’t had a good tutorial, he’d bring out a bottle of Beaujolais.” And even one of his first holidays while at university was a trip to Bordeaux: “I was with a girl called Sarah and we went down to Bordeaux in my little yellow mini. I still remember we camped at the bottom of the vineyard at Château d’Angludet and the owner of the property turned up with a couple of jugs of wine that he’d just drawn off the vat.

”When Clarke left Oxford he pursued an acting career, but he continued to delve into the world of wine world and joined the England winetasting team. He quickly became known as the actor who knew about wine and that’s when he was approached by the Sunday Express to be their wine correspondent. “I was also playing Sweeney Todd at Drury Lane and I thought I was the coolest dude in London!” Later, by chance he was asked to join the BBC TV show, Food and Drink. “Someone dropped out because they had to do a blind tasting in front of a live audience of 9 million people. The guy suddenly got some frightful disease, which he miraculously recovered from 36 hours later. In the meantime, the producer said: ‘get me that actor who knows about wine.’

” Becoming a wine critic followed on from there and he wrote his first book, Sniff, Gurgle and Spit. As his wine career took off, he decided to give up acting and devote his time to wine. “The thought of doing 8 shows a week was a bit too much. I got into wine like that. It was very serendipitous. I was a lucky bloke in the right place at the right time.

”When it comes to his favourite Bordeaux wines, it really depends on his mood, but the region he does find most stimulating is the Médoc, as he explains: “I’m still very excited to get to grips with the area, such as really understanding the soil there.”

And that’s what’s so fascinating about Bordeaux for him – the region can satisfy a broad mix of tastes and it’s the only place that he believes can do it in style. He also thinks, contrary to its reputation, Bordeaux is also perfect for rosés and it’s set up for great sparkling wine too. With regards to Bordeaux dry white wines, he’s particularly interested in what’s currently happening in Pessac-Léognan and the progress that’s happening in that area: “there’s no doubt in my mind that Pessac-Léognan is a world-class wine area.”For food pairings, he likes to stick to the classic combos. “With Bordeaux, you can try and be adventurous as possible, but one of the reasons it’s lasted so long is because it does the traditional stuff so well.

My favourite food pairing is a piece of lamb, with roast potatoes that are nice and crispy on the outside, fluffy in the middle and thick gravy – then serve me an array of Saint-Julien and Pauillac on the one side and Pomerol and Saint-Émilion on the other. I would challenge anyone to make a better food and wine pairing than that!”

For the holiday season he suggests pairing a dry white wine from Pessac-Léognan with turkey, but if people really want red, they should pick a Pauillac or Saint-Émilion. “You can also throw some Sauternes into the mix, if you like foie gras early on in a meal – it’s the perfect pairing. And Sauternes also goes very well with cheese, particularly blue cheese – Roquefort is the great favourite. It’s going to work better than a red. Bordeaux is also great for an apéritif, you could just drink it with almonds, feta cheese or olives.

Oz Clarke’s newest book, The History of Wine in 100 Bottles (Pavilion) is out now and you can buy Oz Clarke Bordeaux: A New Look at the World”s Most Famous Wine Region.

A day in the life of a Biac Grape during harvest
<