It is impossible to stumble upon Marc Medeville’s house by accident. “A GPS isn’t enough, you need to be given directions,” says Medeville himself with a warm handshake. It is here, 12 miles from Bordeaux, that the wine-grower and food-lover is tucked away.Bordeaux vineyards have been owned by the Medeville family for almost 200 years. Marc and his brother Jean own approximately ten Bordeaux châteaux, including Château Fayau near Cadillac.

But today he’s hosting at Château du Juge, where he has lived for the last 15 years. A thick girondin structure with the air of an ancient castle, topped with crenels. “It looks very dramatic, but it’s only there to protect from the wind,”  Marc reasons. In the sixteenth century, this was where the judges of the commune set up, hence the name “château du Juge” given to the wine produced on the surrounding 30 hectares.

In the garden, the Boxer Terrier introduces himself with a few enthusiastic leaps. The sky is grey and low. Summer seems to have resigned. Further off, a few hens are roaming next to some greenhouses full of wildly sprouting tomatoes and salad. “My wife calls that an eyesore but personally, I like greenhouses, especially my tomatoes. I’m growing 7 varieties.”

As he says this, the smell of vegetables already stewing in the pot stops us in our tracks on our way to the kitchen. This is where we’ll have lunch, at the enormous wooden table, next to a newly lit fireplace. “This smells of family Sundays,” remarks Mathieu, the photographer, happily.

This morning, our host got up early to buy some langoustines and vegetables at the market on the corner – the ones in the greenhouse not yet being ripe. “Look how transparent the langoustines are! That shows how fresh they are,” explains Marc, as he adds two vegetable stock cubes.

On today’s menu: oven-grilled clams “lightly sprinkled with breadcrumbs and parsley” to start and Amorican langoustines.

Two recipes he inherited from an unparalleled chef; his mum. “She’s the one who taught me the pleasure of cooking… and allowing yourself to be guided by your instincts. Cooking’s like wine; it’s a blend of tastes and smells. And it’s also a time in life that you share.” 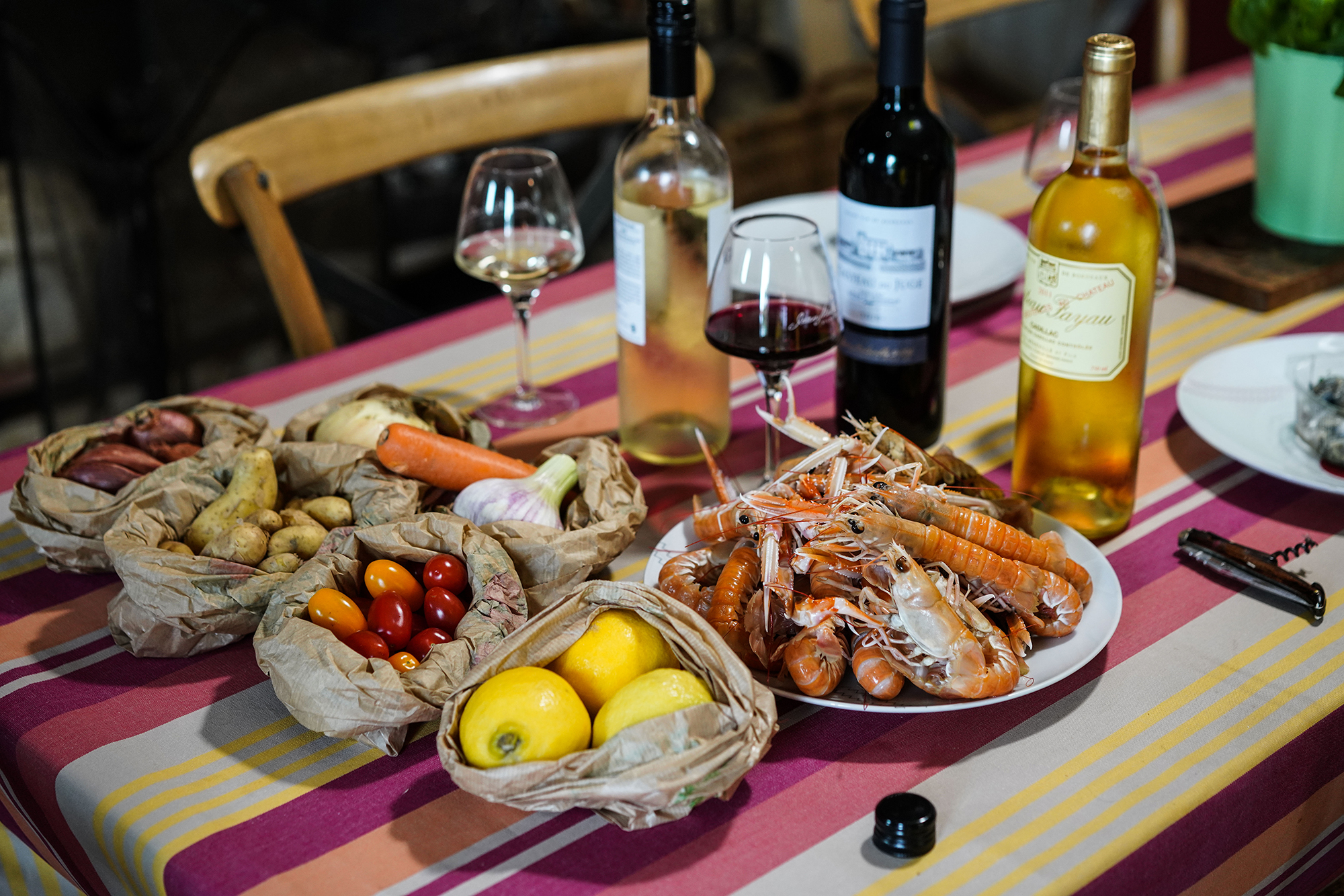 With each course, his wine is quick to follow.

“For the starter we’ll have a dry white wine. For the main, a slightly fruity red. And with the cheese, a Cadillac.” It was finished before it began. And for dessert? “I don’t like making desserts because it doesn’t leave much room for instinct and imagination… so we’ll finish with the cheese if that’s alright with you.” Of course it’s alright with us. 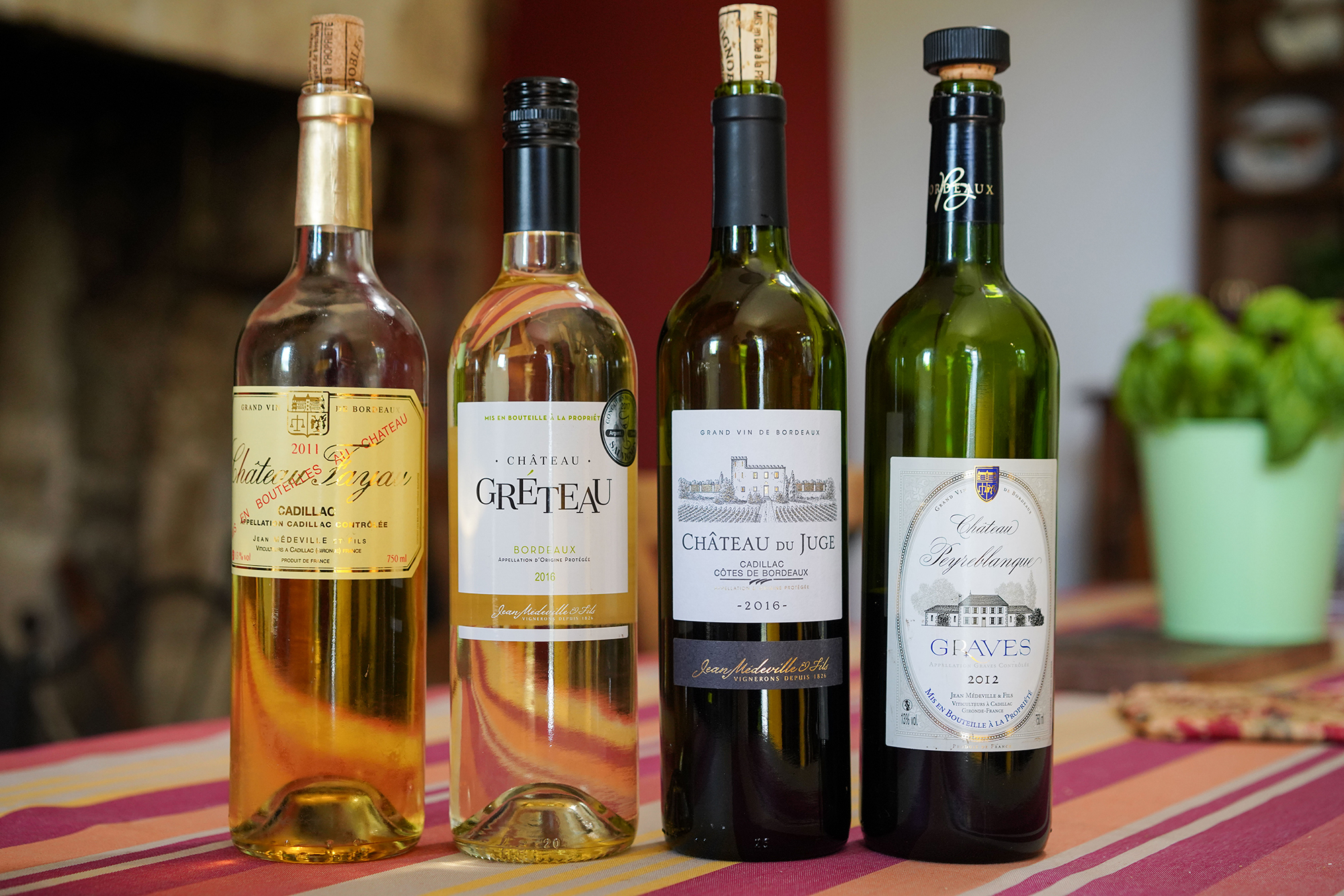 And we’re off. With the aperitif, we toast with a glass – bearing the Medeville stamp – of dry white Château Gréteau. “Pure sauvignon reminiscent of picnics… very good, very fresh.”

Between mouthfuls, our host returns to his kitchen to pour the langoustines into the broth and add the pieces of chilli. “But make sure you don’t put it directly onto the langoustines.” Thanks for the tip.

Then he takes the opportunity to pour a few drops of Château Fayau, a 2011 Cadillac, into the broth, to bring a bit of sweetness to the fish. “There you have it; the earth and sea are gathered in this pot!” Marc exclaims as he rejoins us at the table. In the meantime, the clams have been devoured and the sauce mopped up by our pieces of bread. “Just like that! I haven’t even got out the serviettes or the tablecloth!” 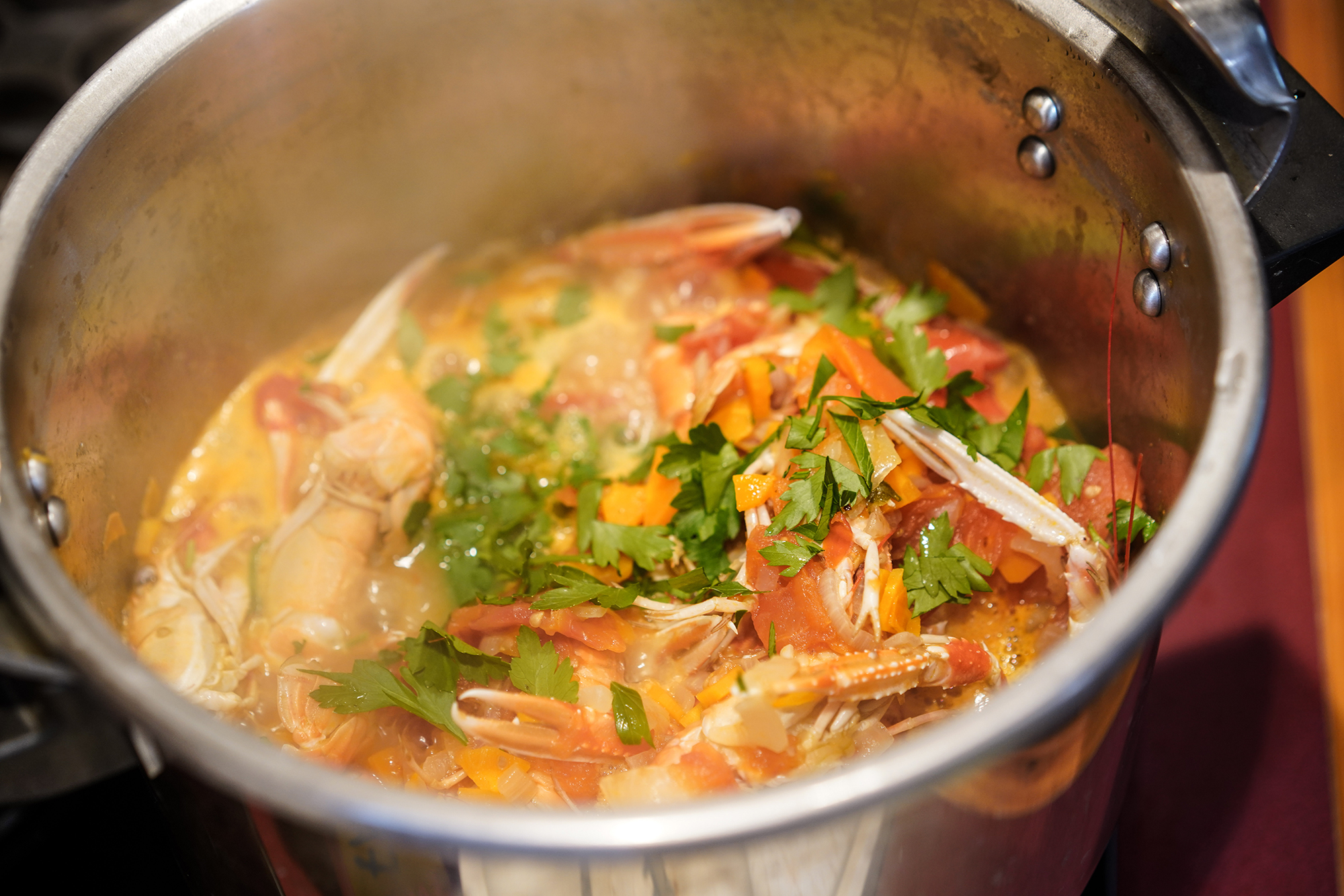 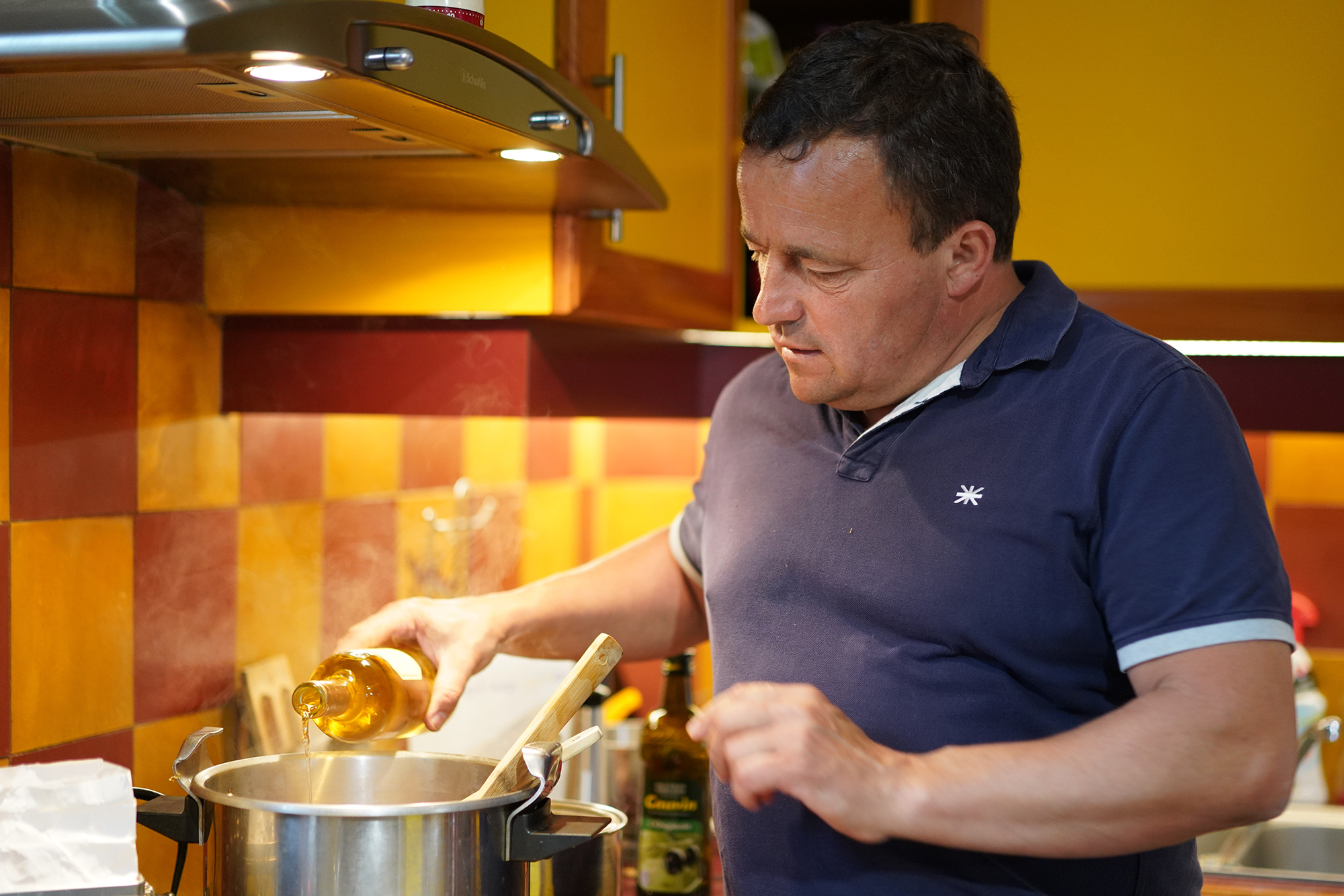 So the meal goes on and we attack the langoustines with our fingers. “The only problem with this dish is that it’s impossible to seduce the person opposite you,” jokes Marc, whose casual manner infects the whole table, a glass of red 2012 Château Peyreblanque in hand. The sauce is delicious, “thanks to the carrots”. We lick our fingers and lips. 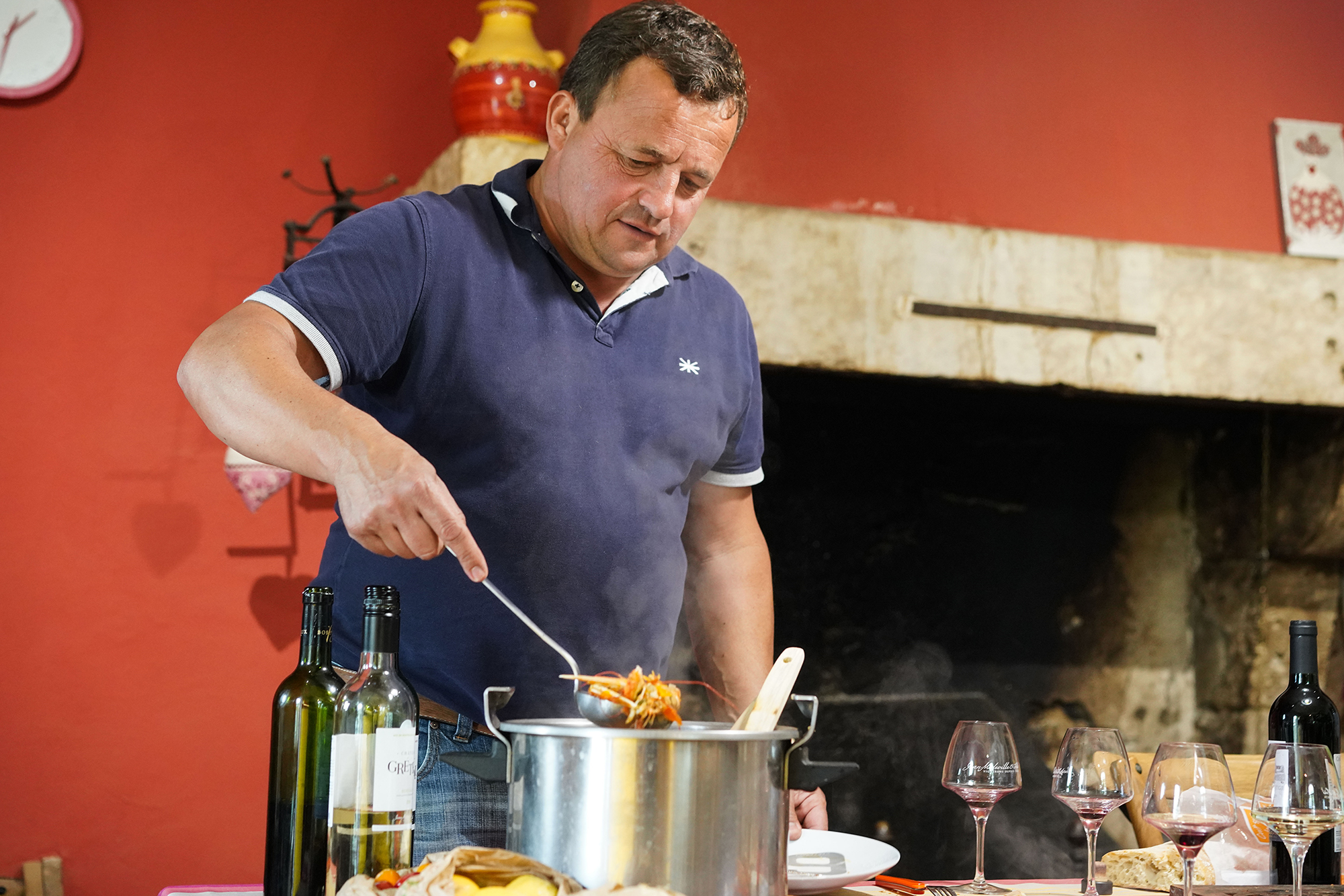 The meal ends with a regional cheese plate pretending to be dessert. “Goat’s cheese, and two cheeses from the Pyrenees, one sheep milk, one cow’s milk.” It’s all accompanied, not by a red, but by a Cadillac, a 2016 Château du Juge. As if returning to square one. “The soil here’s more clay, which makes the wine more spicy, with more character.”

Outside it begins to rain. Our host casts a weary look out of the window. “We wine-growers are all players in the weather show. This year it’s rained a lot…our workers were tired of always having to wear waterproofs and boots. They aren’t ducks. It’s a job that has to be done with passion. But you have to restart the work again every year. Press the reset button and try and play the nature game.”

The Medevilles have always respected nature. So much so that they’ve embarked on organic production over approximately twenty hectares in Entre-Deux-Mers and Bordeaux Rouge. “Though we do consume more fuel oil than we’d like to, but we try… All our wines are already in the High Environmental Value category,” Marc explains while outside, between the vines, a few hares are making the most of the high grass to roam around. “I’m waiting for them to grow before I cut the vines. That’s also part of respecting biodiversity.” 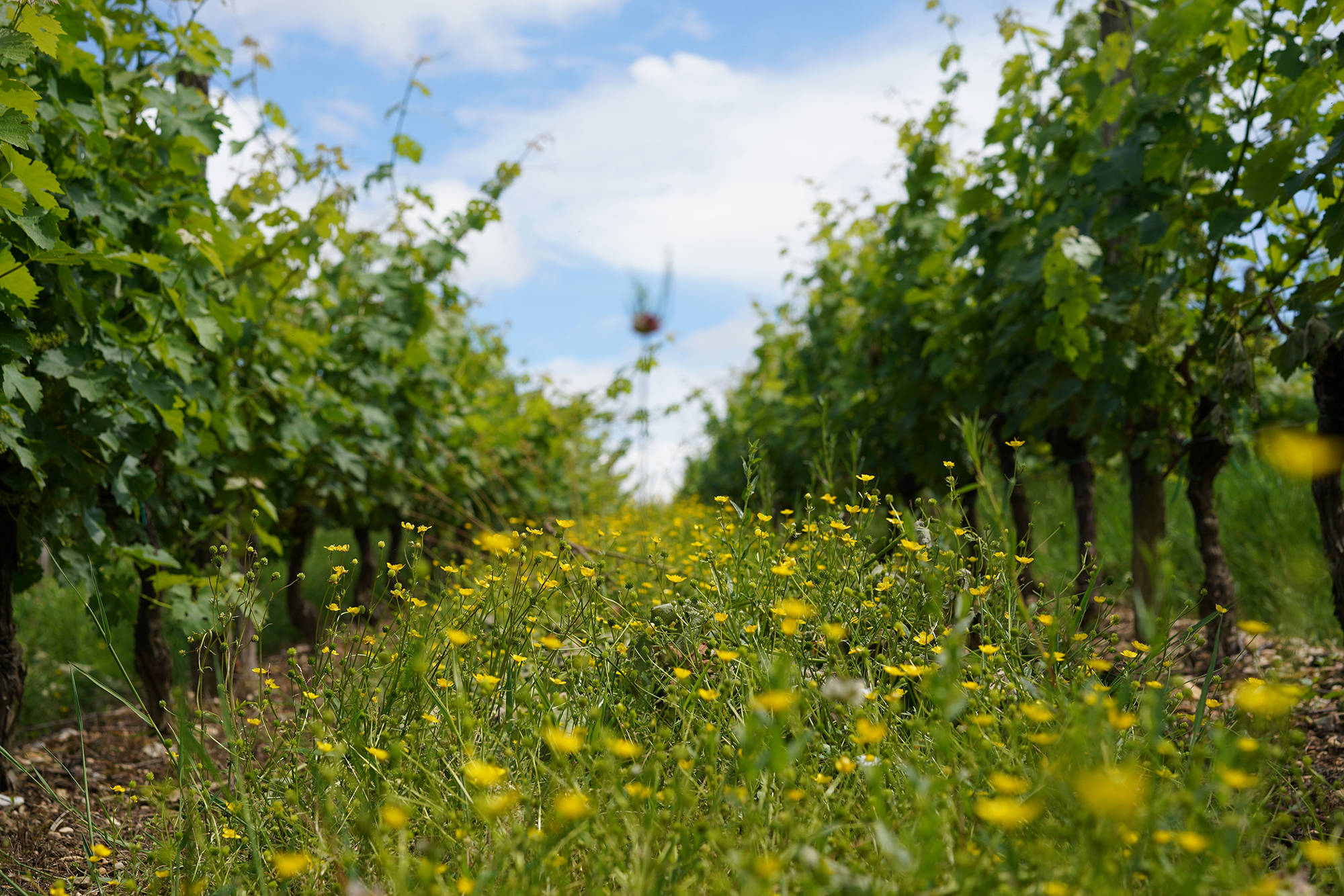 The vines aren’t the only things Marc’s watching grow; there are also his four sons, aged between 14 and 20. “I don’t know what they’re going to do later, but I’ve always managed to instil a passion for cooking in them… we’ll have to see about the wine.” As for the Medevilles, wine, as with many things, is above all a family affair. “We’re the seventh generation to make wine. My father left the company like a migrating bird. He said: ‘When the birds next fly south, I’m leaving’ and that’s what happened,” Marc recalls, a pang of nostalgia in his voice, quickly swept away by his humour.

“Because of you all of my resolutions have fallen by the wayside. I swore I’d go on a summer diet with some friends,” he explains as he shows us out.

Well, we weren’t the ones who lost the bet. But we certainly gained: weight, good company, and a mad desire to get into the kitchen and try out the wine-grower’s recipes. 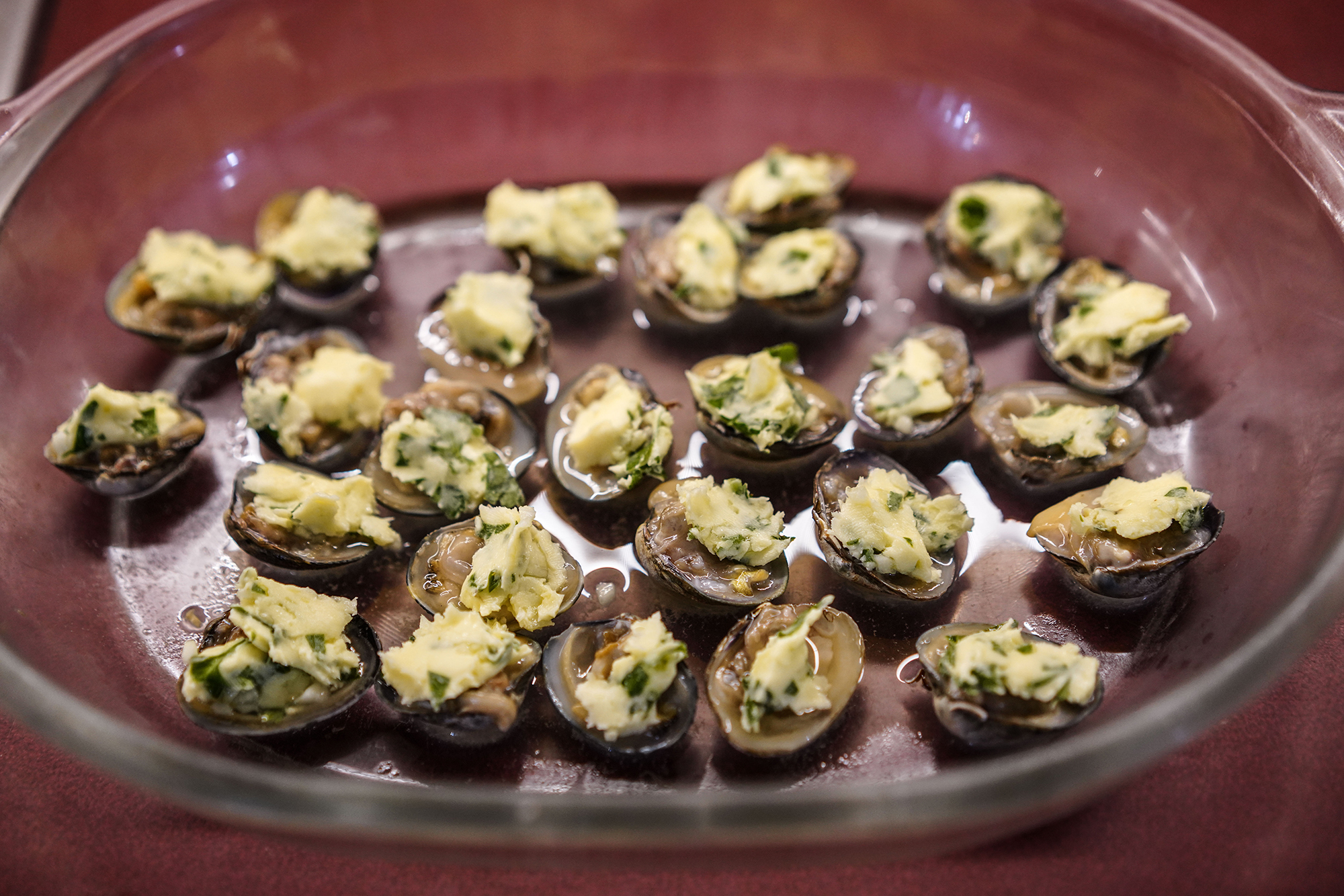 Sprinkle the open clams with parsley, breadcrumbs and grated cheese, adding a knob of butter.

Allow to grill in the oven.

Serve with a dry Bordeaux white such as a Château Gréteau. 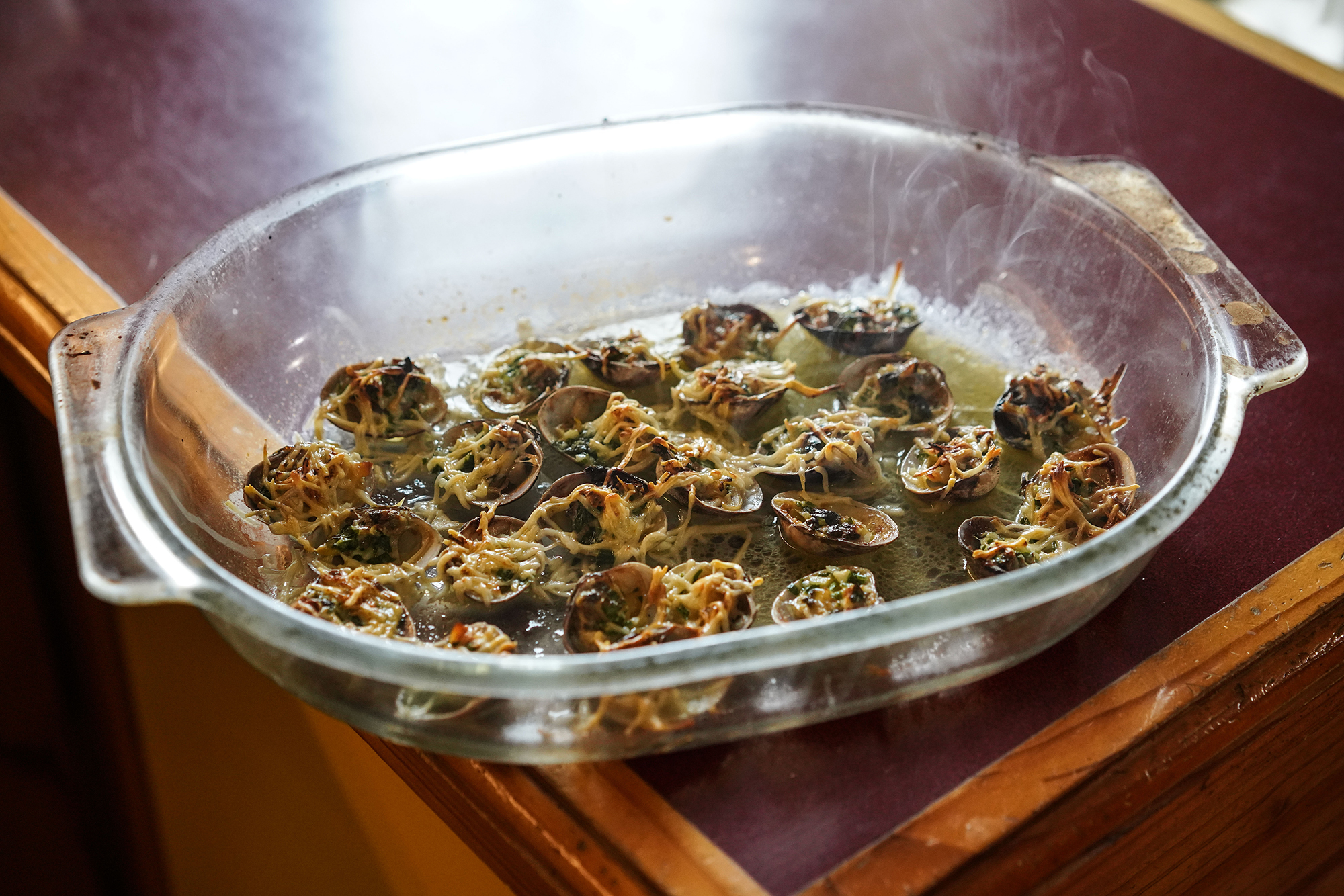 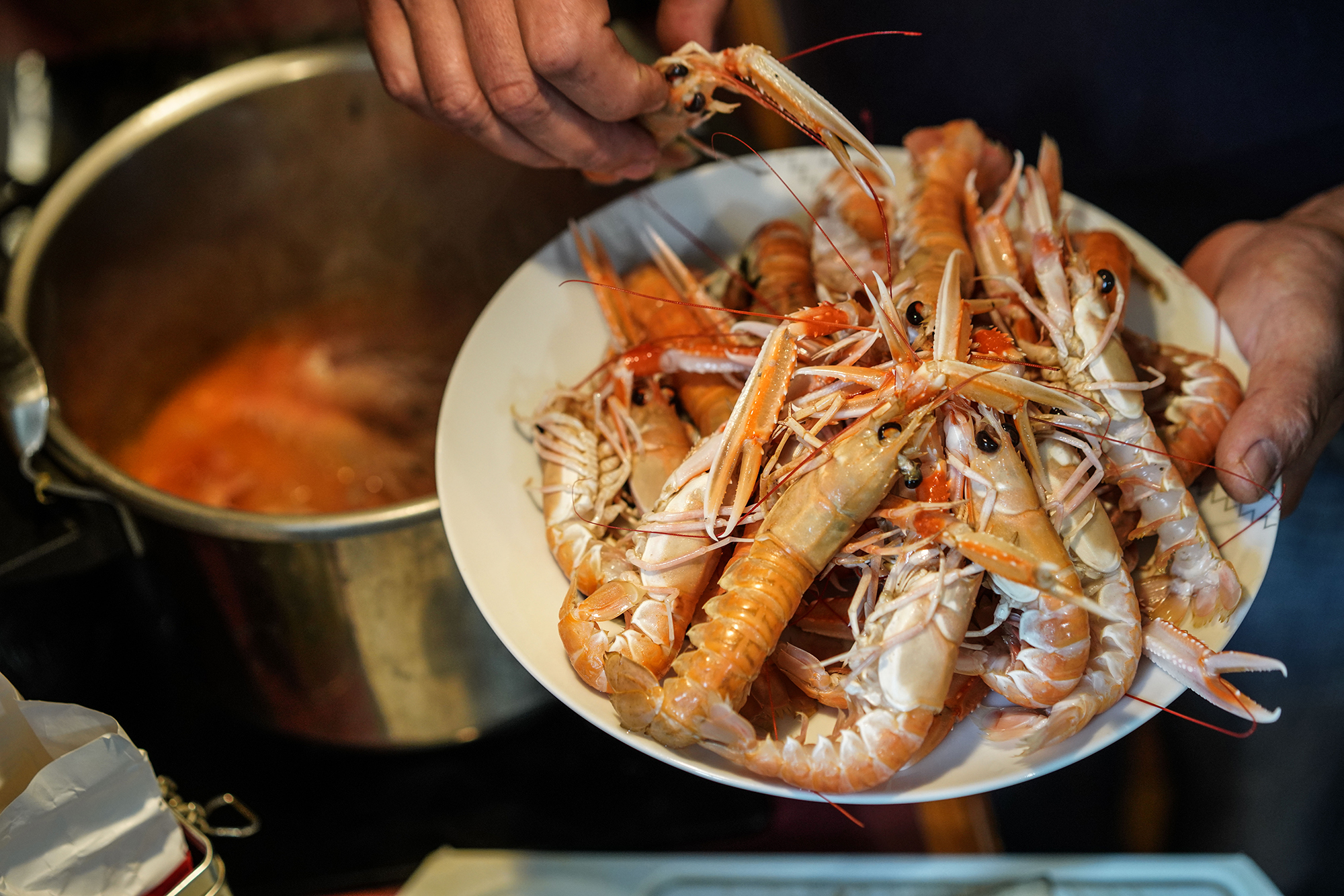 Let it all boil together.

Pour the langoustines into the pot, recover, and allow to cook for half an hour.

When it’s done, add some pieces of chilli and drops of sweet white wine such as a Cadillac.

Immediately turn off the heat and allow to rest.

To be served with a tannic red such as a Château Peyreblanque dans les Graves. 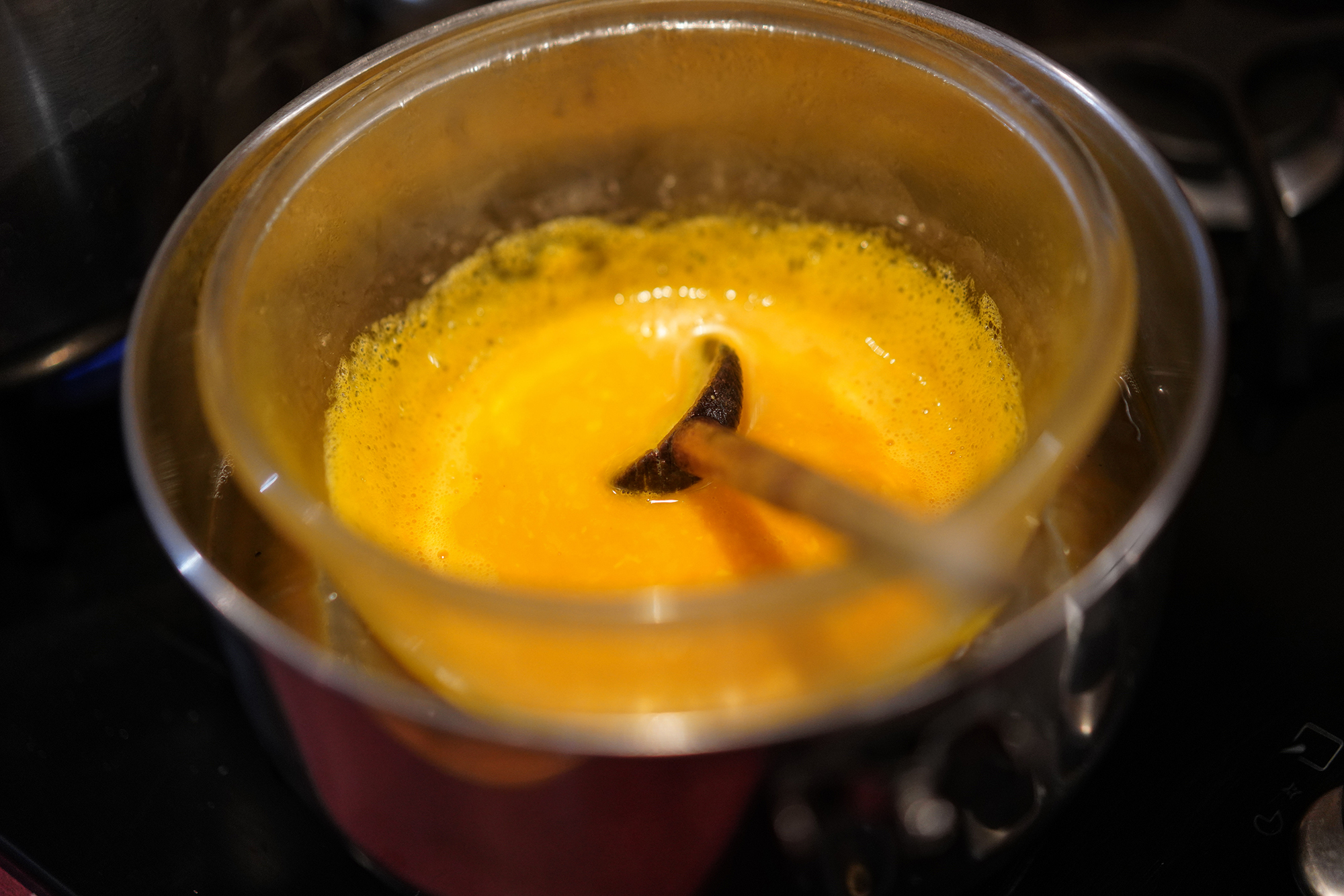 “Real scrambled eggs need a bit of patience, a lot of love, a bain marie and good eggs.”

Beat some good, fresh eggs and cook for 15 minutes in the bain marie, stirring frequently. Make sure the bowl remains stable. The texture of scrambled eggs must be smooth, creamy (“and not lumpy as when done in a pan”).

To enhance the flavour, add some asparagus tips – or pre-cooked mushrooms – and a pinch of salt after cooking.

To be served with red wine, Merlot and Cabernet, which complements the acidity of the asparagus. 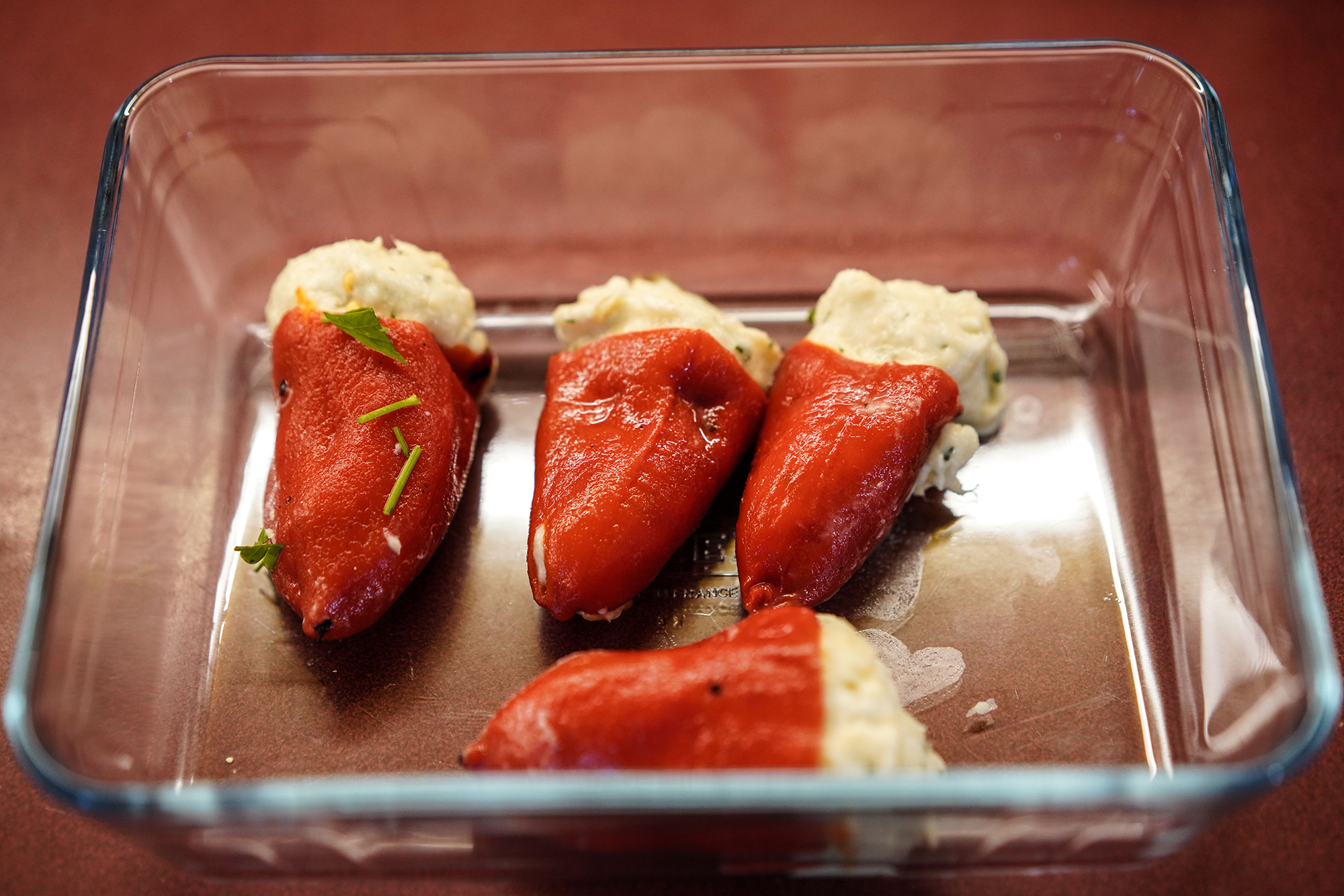 Cook the piquillos in the oven

Remove the skin and stuff them with the cod brandade.

For the cod brandade: after desalting the cod, cook for 15 minutes in boiling water. Then work it down into purée with olive oil. Add garlic and parsley.

To be served with a tannic red such as a Château Peyreblanque dans les Graves to bring out the spice of the peppers.

Four original activities to do in Bordeaux
<